I know it’s been a while. The last half-year had been a time that I have been feeling really low, not only as a filmmaker but also as an individual. I can easily reason it away, blaming it all on Corona, lockdown, isolation, and so on. But that’s only skimming the surface. This article itself has been in my drafts for over a month. I never got the courage to publish it. It took me this long to even see the truth. And the truth is that I lost faith.

I lost faith not only in myself, my skills, what I learnt, but I also lost faith in what I believed the world is. Despite doing everything I could, to the best of my knowledge and abilities, my debut film Munnariv did not reach the audience that I hoped it would or believed it should. And this pained me, a lot. You see I was one who believed that the world is a just employer and that I would be rewarded (monetary ones) for the good work I did. But that did not come. At least it did not come as fast as I hoped it would, and the pain of not having ‘succeeded’ did not stop me from sending myself into a downward spiral.

Like every other human being, I did not want to feel the low of failure. I had to find a way to distract my mind. But I do not smoke or drink. So the next easiest escape was mindless entertainment. I would sit and watch three or five movies a day. If not movies, then I would binge-read novels, or binge-watch web series.

I did whatever I could to keep my mind off of the painful reality that was around me, afraid that if I let my mind loose I will go back to all the sad thoughts and feel low again. I did not want to give my mind space to even think of those. Even when I went to bed, I would be on my phone, searching for random things of no particular use. I would do this till I was so tired that I would fall asleep the moment I kept the phone down, not letting my mind wander anywhere that I did not want it to.

Before this, I used to sleep every day by 11 and be up by six or seven. But once I started numbing my mind my sleep time went to 1 o’clock, then 2, then three. Once I did not even sleep. I spent the entire night reading a gigantic web novel. That was when I perhaps realised how low I had hit.

This might not seem as dangerous as addiction to a substance. But I was destroying my body’s sleep cycle. Recently I had seen this Hollywood movie called Bridesmaid. It is about a girl who sabotages her friend’s wedding being the bridesmaid. She is neither an addict to alcohol nor cigarettes. But she is unable to help herself and keeps pulling herself down. She was an addict to self-sabotage.

It was funny as hell watching her destroy her own life and her friend’s wedding (it was a comedy after all). But what intrigued me was that in most films when somebody is unable to deal with pain they are shown to be getting drunk, to be smoking, or taking drugs. It was the first time that I was seeing somebody who was none of these but was still trying to run away from their pain and fears. Watching her struggle made me see what I was doing myself.

On a side note, this is what I believe to be the power of stories, watching others struggle and seeing them come out of it helps us do the same. Learning by imitating.

Perhaps my feeling low would not have been this bad had it not been for the lockdown. When the lockdown started I did not believe I was someone so easily affected being locked inside a house. That was my life for the five years that I spent learning filmmaking.

Yes, chats, messages, video calls, listening to music, watching movies, reading novels, shopping, all of these do help us feel connected to an extent. But the feeling of sitting in front of a person, looking into their eyes, touching and talking about the climate might seem trivial, but they are irreplaceable.

I realised this when my cousin came from Thrissur, six months after the lockdown had started. It was the first time since I was going out and having food from a restaurant. It used to be a regular thing that we did every week. It is one moment that perhaps started the shift in me. I guess it was these kinds of small things that kept my life afloat.

We need human connection. Human beings are social animals after all. I am starting to realise how important the human connection is. Spending time with friends and family connects me to my old good times and takes my mind off all the seemingly impossible to cross problems (most of which exists only in my mind). Human connection is perhaps something that is as needed as oxygen, even to an introvert.

Perhaps the lockdown and Corona is a blessing in disguise. Now that I am getting back into my life, I see clearly some of the things that I loved doing but didn’t realise their importance.

I love going to a new place and exploring it on foot. I would fix a destination, find the general direction that I need to be going in, and then I would just walk, through narrow lanes, highways, bridges, underpasses, going with the wind, going with the smell, exploring. Not only would I end up with photographs that fill my Instagram feed for days, but I also end up meeting interesting people and eating food that I long for. I look forward to travelling again.

I also miss working out at the gym, keeping myself healthy. It was perhaps missing out on such small things that aggravated the situation. But you can only take it so far. Somewhere, some time, it all added up and made me decide that enough was enough, that I was going to move ahead.

The reason I started writing this article a month back was that coincidentally three of my friends messaged me asking how I dealt with my low phases before. Another person that I talked to just yesterday saw my social feed and felt that I had everything cut for me and that I was working at optimum efficiency every day. He felt relieved to know all these things that I was grappling with. All of these made me feel that perhaps there might be even more who needs to know the truth about feeling low as a filmmaker and as an individual. If you are one of them, then know now that you are not alone. Everybody goes through difficult times.

I don’t think there is an easy way out but to ride the wave. For example, after a break up you can try immediately falling in love with another person. Yes, it works, for the time being masking the pain. But it is just a patching up of the wound. Rebound relationships rarely last and most of the time actually cause more pain than what was there initially—not only to you but another person as well.

Remember the Past Breakthroughs When Feeling Low

What else is there to do but pick yourself up after you have fallen? Think of yourself when you were a baby, trying to learn to walk. Had you counted the number of times you had fallen, it would have been staggering. When you were down on the floor watching all the huge grown-ups walking by, do you think you were sitting there pining how you were ever going to walk, that you are a failure, that you are a disaster, that you are worthless?

I’m still only recovering my normal sleep cycle. I should have been researching and writing my next film but I didn’t. Perhaps I could have done better, or perhaps the sulking was exactly what I needed. We all go through our up and down cycles. I still believe the recognition and the reward for the value our film brought is on its way. It is beside a corner that I perhaps have not yet turned, or one that I have turned but is unable to see the reward that is right in front of me.

I read somewhere that if you get happy because of good things happening to you, then you are as likely to be influenced by bad things happening to you. The more you let yourself be influenced by what is happening around you, the more the pendulum swings. According to mystical teachings, the way to overcome being influenced by the swinging of the pendulum is to consciously choose to go higher up, to a higher plane of existence. I do not yet comprehend how to do that. Is that what is known as being a stoic? Was that what Buddha and all the ancient teachings were about? Maybe as years go by I will learn.

I hope all this gives you a holding hand. I type this out as the morning sun rises outside my window, shining its warm orange light on my face this cold December. A new beginning. And I wish you the same, a brand new year full of possibilities, of human connections, of the very essence of life itself. Wishing you a prosperous year ahead. 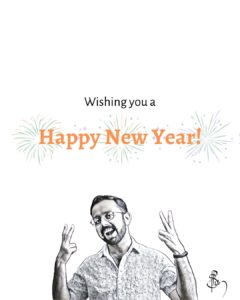